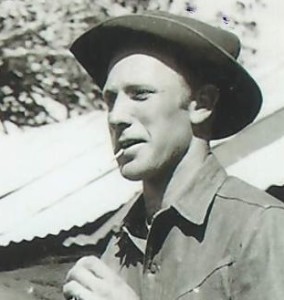 Bruce learned to work hard as a kid. He said there were so many of them that there was no way his Mom could have done it alone. Bruce chopped wood, carried wash water to the fire outside and heated it in a galvanized tub, carried it inside, and then out again to dump it. They all helped and they all worked. He said, “My Dad made life a little better for us kids all our lives.”

At the age of 13, Bruce found a job breaking horses for Colonel Teskey up at Dugas. He lived out on the land for months at a time with a silent Apache Indian as his partner. At about that same time, Bruce learned that, if he waited by a watering place, he could check out the local wild horse herds and, if he was lucky, he could catch one of the colts, ride it in the open where it could run, and then let it go.

At 15, Bruce worked for the Quarter Circle V Bar Ranch foreman, Mark Null, and lived down at the Taylor Place breaking horses again. He described Mark as a jolly man, and accompanied him several times into Mayer when Mark wanted to play poker. Returning from one such trip, Bruce related how Mark ran off the road with his car into “that goddamn Long Draw. “Mark was heard to remark, “Well, it weren’t like that when we came.” (Charlie Orme always said that Mark Null taught Mort and him everything they ever knew about horses and cattle.)

Bruce entered the service at 18 and stated he was in for 30 months. When he got out, he went to work for Charlie Orme in about l945. At that time, he found himself involved in something the other hired help were doing wrong, and somehow Charlie incorrectly assumed Bruce was involved too. Bruce left the Ranch at that point for 6 months because he felt that, if Charlie couldn’t tell the difference, well, he didn’t want to work for such a man.

When Bruce returned to the Ranch, he became essential to Charlie’s gradual transition from rancher to Headmaster of a growing school. Mort, Charlie’s brother, was away in the service and Bruce took over many of the livestock-related jobs. He rode the fence line, broke horses, rounded up cattle, helped Uncle Chick with the farming, and began a lifelong interaction with the students. He took over the milking chore from Uncle Chick, and eventually had his own student crew who rose early and worked late in the afternoon just to measure up to Bruce’s strict standards. It is said that one boy actually slept with his milking boots on so he would be ready at 5 am. In those years, the milkers were among the most admired and respected kids on campus. They loved going that extra mile for Bruce and for themselves.

Bruce was promoted from ranch hand to Foreman during his 40 years at Orme. He put his mind and his considerable physical strength to whatever job was needed. As he said, there was no friction in those early years because everybody was working together to do one thing – BUILD. He worked on building the swimming pool, building many cement block dormitories where he and the students actually made the bricks and, in l968, he helped Uncle Chick realize his dream of a cement flume from the Mesas to Big Lake. In every such job, Bruce worked with and taught students. He showed them how to feed the animals and accomplish other chores while they went to school. In countless ways, he demonstrated the work ethic we students learned to follow.

Why were we so influenced by this man? Perhaps he can answer this best in his own words from an interview 30 years ago. When asked if he remembered certain students he replied:

“I always remember the students who tried the hardest and wanted to do the most. You always remember those people wanting to get in there and make things better, if not necessarily for themselves, for other people. I think the main thing is if you can teach each kid a few fundamentals, that shows up in them for a lifetime. You can’t ask much more than that.”

When I think of the roping arena, I think of students like Johnny Weister, Monte Montgomery and others who went up there and built that arena. They didn’t hire someone to come in. They went up on their weekends for about two months during all their free time. They dug the holes. They put it totally together.

When I started 4-H, I remember Ann Nelson, Annabelle Cox, Midget Onan and Wags Gray, people like that because they were always strong. They did a good job not for one year, but for several years. I mean you just don’t forget this kind of person.

As long as you were fair with them and consistent, you never had any problems. I always thought they were some of the greatest, toughest, most competitive kids in the world. They didn’t know what it was to quit. They hung in there, win, lose or draw…they have real grit.”

When describing The Orme School in a telephone conversation just before he died, Bruce said, “I never saw another place that had as much control as they had. Kids didn’t mind.”

Those of us who knew him reflect on the fact that, all of our lives, we campers and students have done our best to follow in Bruce McDonald’s footsteps. He was our guide, our beacon of strength, and we hope one day we’ll measure up.

If you have a personal story about Bruce McDonald that you would like to send to the Orme archives, please email it to jcalmes@ormeschool.org.