Two Orme School Latin students, Rose Mayer and Ashley Coffey-Stonebraker, were awarded bronze medals for their performance on the 2014 National Classical Etymology Exam. This national contest is sponsored annually by the National Junior Classical League. Etymology is the study of word origins. The National Classical Etymology Exam tests students’ ability to handle both Latin and Greek derivatives and their usage in the English language. 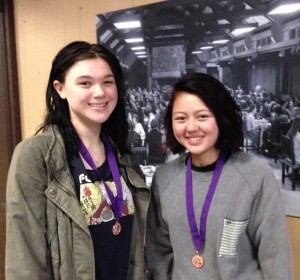 Orme Latin students will have many other opportunities to show off their knowledge of Classical languages, life, and literature during second semester. At the end of February, students will don togas and head to the Arizona Junior Classical League Convention, where they will participate in contests such as “Certamen” (a quiz bowl competition), Latin Sight Reading, and Latin Oratory. In March, students will be competing in the National Latin Exam, The National Mythology Exam and The National Roman Civilization Exam. Bona fortuna to all our Latin students as they prepare for these events. Ad astra per aspera! To the stars through difficulties!