Many years ago, I read a book written about the importance of place.  It may have been called “A Sense of Place,” but I cannot remember. The theme of the book was that a sense of place was really valuable in a changing and unpredictable world.  Literally and figuratively, a strong connection to the place one inhabits grounds an individual and enables that individual to gain a sense of self.  In other words, you come to see or understand who you are and what you can become to a large degree in relationship to your environment. Dating back to the religious and spiritual traditions of the five Candlelight Service lessons from Proverbs, The Torah, The Qur’an, The Buddhist Middle Path, and the wisdom of Sitting Bull, as well as Western philosophy beginning with the likes of Socrates, the underlying message of the book and my Closing Remarks tonight is that there is an interesting ‘give and take’ between the subjective inner world and the objective outer world.

The book about the importance of place was one of the assigned readings of a summer course for alumni offered at the small liberal arts college in Upstate New York, which I had graduated from about twenty years previously.  It was my first time back on campus since graduation, and the theme of the book resonated with me.  I thought a lot about the places I had lived over the span of several decades, and the impact each had on me.  For instance, my semi-rural, small college and the wonderful education I received there contrasted greatly yet resembled in some ways my suburban, extremely large, not so wonderful high school education.  The Boy Scout camp I attended for several summers was both similar and different from the wilderness canoe camp I served at as a counselor many years later. I realized that these different but similar schools and camps shaped who I had become.  And the points of contrast and comparison between the places helped me understand the world around me and my place in it.  I realized that the experiences I lived through in these various places shaped me in fundamental ways.  Perhaps that book on the importance of place was simply stating the obvious, but I think it was stating a truth of human existence.

Over the holiday, I encourage you to think about the importance of place and Orme.  When you think about Orme, what comes to mind? How would you describe the feelings you have associated with living here compared to the other places you have lived?  How would you describe this place called The Orme School to someone who has never been here?  How will you describe Orme to someone you meet on the airplane tomorrow or someone you know back home?  Or better yet, would you describe Orme in similar terms as Danny just did in his Candlelight Meditation?  It took courage for Danny to get up in front of the entire community and share what he did.  Thank you, Danny.

Danny stated that he was essentially a different person in his large suburban LA high school – avoiding problems and distracting himself from reaching his potential.  He said there is nowhere to hide at Orme, and described that feeling in positive terms because it challenged him to be true to himself.  Similarly, one of the things I discovered in my Chicago suburban public high school was that it was easy to be a fake. With limited history of each other and a lack of in-depth knowledge of each other, many students tried to be something that they really were not and that irritated many others.  There was not a strong sense of community.  My high school, and it sounds like Danny’s high school, as well, was not a caring and supporting place.  In large schools in large metropolitan areas, I believe many students feel a sense of alienation and even repulsion toward those who try to present an artificial self while stereotyping others.  It is hard to be someone you aren’t here at Orme, and no one is judged less of a person when they are just being themselves.  It is also difficult to caste individuals into narrowly defined groups.  As I look across this room, I see a lot of folks – teachers and students alike – who would call you out on trying to be someone you were not, or to falsely label another.  Those same people, however, are just as likely to accept you as you are, or challenge you to be the best you can be.  Orme to me is a place that is willing to accept you for who you are, but is equally committed to challenging you to be better.  I trust many of you see things through a similar lens and that makes this place special.

Quoting Socrates, Danny emphasized “Know thy self.”  I would agree with both Danny and the greatest philosophers ever to live.  Oh, and by the way, Socrates was very much shaped by his place, Ancient Athens, a small city-state where all were known and all had a voice in a world that was becoming increasingly complex and cosmopolitan.

It has been said you are what you eat, but as we proceed to Founders for what I assume will be a wonderful meal, I would like to suggest we are where we eat and with whom we eat to an even greater extent.  Place matters, and I am very fortunate to have found this place, The Orme School. 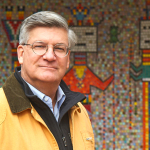 Have a Merry Christmas, Happy Hanukkah, and wonderful winter break and New Year.