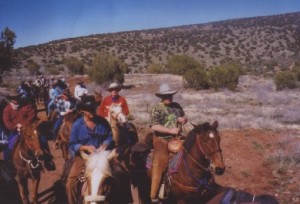 In the late 1960s, a group of Orme alumni began talking about how the dirt roads throughout America were disappearing. It was proposed that, before they were all paved, the group should take a trip from the West Coast to the East Coast traveling only on dirt roads. They soon realized that would not work, so decided to make it a horseback ride from The Orme School to Phoenix, Arizona.

This year the group will be going on their 40th ride! The trip is scheduled to take place Wednesday, March 25 through Sunday, March 29, and includes a big hoedown and party on Saturday evening with camp songs and professional western entertainment.

Los Vaqueros de Farmacia welcomes new riders. If you are interested in joining this year’s ride, please email Merle Frost ’57 at mfrost-camco@att.net or call him at (949) 500-2296.