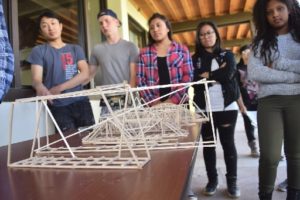 Students in Mr. Steven Pankratz’s Conceptual Physics class built bridges using balsa wood and Elmer’s Glue. The project dovetailed with the students’ studies of tension, compression and arches. Given several class periods and one late night construction session, student-built bridges were made to span a 25cm gap, and needed to hold as much mass as possible (represented by a water-filled bucket) until failure.

As hypothesized, bridges incorporating arches tended to do better than those without, but the difficulties in satisfying curves gave students an opportunity to experience Die Tucke des Objekts (a concept developed by Friedrich Theodor Vischer), or The Perversity of the Inanimate, which led to a profusion of truss bridges. 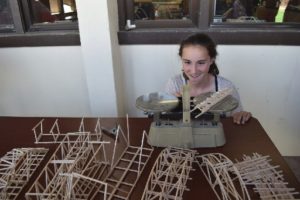 An informal score of how heavy each bridge was, divided by the total mass each was able to hold, was used to index the relative ‘success’ of each construction.

By that measure, the sturdiest bridge was built by Nayad Hambissa ’18. It held an impressive 16 lbs. with a bridge mass of only 9.4 grams!